The language of neurons is ion movement across the cell membrane.  When a neuron becomes activated, positive sodium ions rush into the cell through ion channels (gates in the cell membrane that can open and close).  This flow of ions (also called “current”) is propagated from cell to cell, to initiate some sort of response (a movement, a thought, etc).
How are the five senses translated into ion flow?  For olfaction (and taste), odor molecules bind to specific receptors which activate a signaling cascade in the cell which eventually leads to ion channels opening.  When a sound wave enters our ear, it moves little hairs on the auditory sensory cells, which cause ion channels to open.  The sense of touch works in a similar way: there are receptors, called mechanoreceptors, which are gated by physical pressure to the cell membrane (Figure 1).  It’s analogous to pushing against a swinging door; with enough pressure, the door will open up and let things pass into the building. 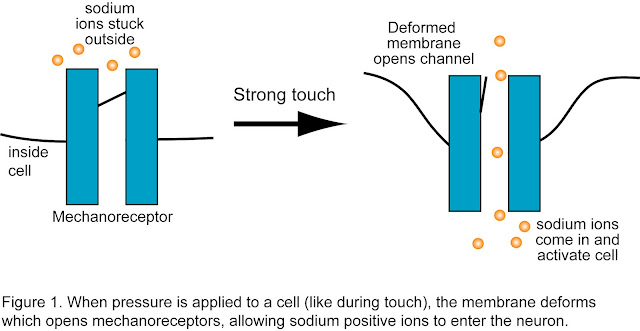 In this week’s paper, which appeared recently in Nature, Kim et al. characterize a new mechanoreceptor called Piezo ("piezo" comes from the Greek meaning “to press”).  Mechanoreceptors have been studied before in Drosophila fruit flies, but Piezo is the first one that is evolutionarily conserved in mammals too.
Piezo mutants
The authors made a mutant fly line that is missing the piezo gene.  These flies survive and seem healthy enough, but when they tested the larvae (the “maggots” if you will), the authors discovered that they had lost their response to strong touch.
To do these experiments, they used what’s called a von Frey filament.  These are little hairs made from varying diameters of nylon, which they pressed against the larvae until the filaments bent.  The amount of force needed to bend the filament varies with the diameter of the filament, so you always know how much force was applied to the filament and thus to the larva.  Larvae don’t like being touched (it might be equivalent to someone punching us), so they will respond by rolling or wriggling away.
Wildtype larvae (not mutated) responded to the strong touch more than 80% of the time, but the piezo mutants responded only 34% of the time.  Interestingly, though, the mutants responded normally to both high temperature and gentle touch, which shows that some other receptor must transduce these sensory signals.
Where is Piezo expressed?
Since Piezo is necessary for noxious (i.e. strong) mechanosensation, it must be present in sensory neurons.  Drosophila larvae have different types of sensory neurons lining their body walls.  One subset of these sensory neurons is called ppk-positive, because these cells express another mechanoreceptor called ppk (short for pickpocket).  The authors find that every ppk-positive cell also contains Piezo.  In their first experiment, they used mutant flies where every single cell was missing the piezo gene.  Now the researchers knocked down expression of piezo only in ppk-positive cells, which caused the same decrease in number of larvae that responded to strong touch.  They were also able to rescue the mutant piezo flies by expressing the normal Piezo protein only in ppk-positive cells.  In other words, Piezo and the other mechanoreceptor, PPK, act in the same sensory neurons.
Piezo and PPK both mediate mechanosensation
Recall that the piezo mutants had a reduced response to noxious stimuli, but the response wasn’t completely abolished.  What accounts for the 34% response rate?  Could it be PPK (which is still present in the piezo mutants)?  Sure enough, when Kim et al. reduced expression of both piezo and ppk, the response to strong touch was effectively abolished (see Figure 2 below). 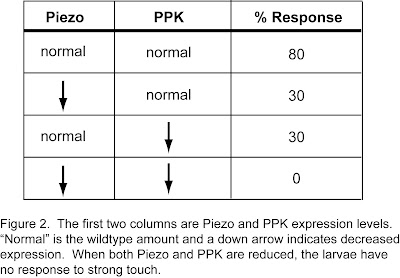 This means that the sensory neurons express two different mechanoreceptors that both respond to strong pressure by passing positive ions into the cell.  Larvae definitely want to get away from painful stimuli, so it makes sense that there would be redundant pathways.  It’s such a simple and elegant way to sense touch.  Mechanoreceptors act as the translators between a physical stimulus (touch) and the electrical signaling of neurons.

I am a cell biology researcher and instructor. I teach at UC Berkeley. I will explain interesting new articles here when I can. My interests are in cell and molecular biology, neuroscience and biotechnology. I take requests. Email me.